Intuit®: Official Blog > News > For Many Americans, the Earned Income Tax Credit and Child Tax Credit are the Biggest Stimulus Checks of the Year. This Year, Every Dollar Counts. 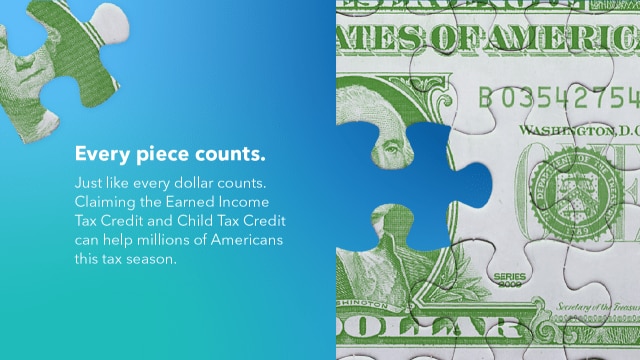 Today, the official start to the U.S. tax filing season, brings an opportunity to empower individual taxpayers by raising awareness of the Earned Income Tax Credit (EITC) and Child Tax Credit (CTC) that could serve as significant forms of relief to Americans who need it the most. Congress is currently debating an expansion of these programs for one year, with some suggesting a permanent expansion. We encourage ongoing conversation on these issues, but from our perspective there is one thing that is not up for debate: every American deserves to receive every dollar they are owed by the U.S. government.

Last year, more than 110 million Americans received tax refunds. For most of these taxpayers, their refund check was the largest paycheck they received all year. However, millions of taxpayers are still missing out on valuable tax credits. According to the IRS, about 25 million eligible filers received the EITC, and the average EITC refund was approximately $2,461. Yet, the IRS reports that one out of five qualifying filers fails to claim this tax credit.

Intuit is committed to making sure all our customers – including those who are eligible for the EITC and CTC – get every dollar they are owed. It’s more important than ever to make sure Americans claim every credit and deduction they’re eligible for and receive all of the benefits they are entitled to.

The economics are stark. Crippling high-cost debt and low household savings have been worsened by COVID-19. Unemployment is at nearly twice the pre-pandemic levels of February 2020 and 62 percent of Americans are living paycheck-to-paycheck. The U.S. economy is projected to expand 3.7% in 2021 but it will take several years for output to reach its full potential and for employment to return to its pre-pandemic peak, according to recent Congressional Budget Office estimates.

For low- to moderate-income workers and families who have been hardest hit by the pandemic, especially Black and Hispanic Americans, the EITC “lookback” provision that enables filers to use their prior year income to claim the credit could offer some much-needed financial relief. A 2019 analysis from the Center on Budget and Policy Priorities (CBPP) found that 21 percent of Black and Hispanic women qualify to receive the EITC. Comparatively, minority women receive larger EITC benefits, with Black and Hispanic women averaging a tax credit of $2,100 and $2,200 respectively. The credit is the largest need-tested program that provides cash benefits.

Intuit partner organizations like Build Commonwealth, Prosperity Now, Neighborhood Trust, SaverLife, Code for America and community-based Volunteer Income Taxpayer Assistance (VITA) programs are on the front lines in educating Americans about how to claim the EITC. And our own Tax Time Allies program – managed by the Intuit Financial Freedom Foundation – is working alongside them to amplify their important work.

No matter how the tax code changes, we will remain focused on bringing relief to millions of taxpayers by helping them obtain the maximum refund they are eligible for as quickly and easily as possible. Because this year, more than any other, every dollar counts.