Artificial intelligence is widely seen as one of the most powerful technologies of our current era, with transformative potential that’s only beginning to be realized. Given the excitement surrounding AI—which often outpaces a more nuanced understanding of its capabilities and use cases—it’s perhaps inevitable that it generates a certain amount of negative buzz as well. A recent article in The New Yorker explored the fear that AI might displace humans from the workforce in massive numbers; others have suggested unintended consequences such as intrusive advertising practices and data-driven government policies that reinforce existing biases.

Any major technological revolution will bring a vigorous point-counterpoint from futurists, economists, and sociologists, but amid the hype and backlash around AI, it’s worth taking a moment to consider some of the real ways cognitive technologies are changing lives right now—and helping make the world a better place for all of us.

With more people flying more miles every year, reducing the likelihood of in-air failures is literally a matter of life and death.

While working at NASA as one of the leaders of its aviation safety program, my team and I collaborated with colleagues at Honeywell to develop a system that would use AI to provide advanced warning of potential issues. Our work began with the historical analysis of data from past flights and using that data to train machine learning algorithms to identify some of the causal factors of an engine shutdown—the chain of events that could lead a plane to lose power in midair. For example, a fault in one subsystem can cascade through the system and ultimately trigger an automatic shutdown. As machine learning revealed scenarios like these, we next built a reference model that looked at the difference between that first problem and the current state of the aircraft. We then combined this model with capabilities for reasoning and inference, evidence handling, active querying, cascade analysis, and process generation to build out the Vehicle Level Reasoning System shown below.

Post-hoc analysis showed this system to be effective in identifying an impending engine failure 20 – 30 flights before it actually happened. 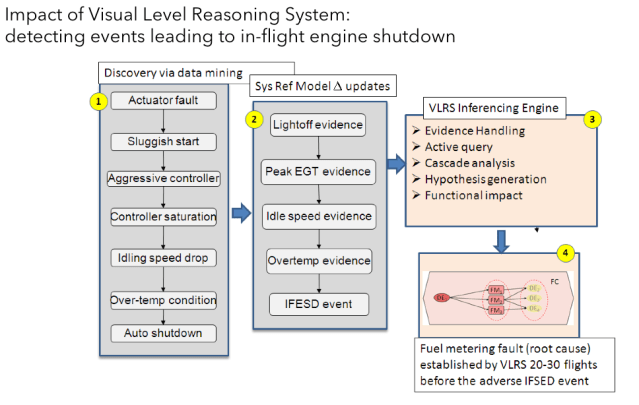 I joined Intuit in large part because of its mission to power prosperity around the world. What this means on a product level can be seen in our QuickBooks Capital offering, which allows people to take out personal loans for their small business in situations where such financing might be unavailable from a traditional institution.

According to the U.S. Bureau of Labor Statistics, about half of small businesses fail in their first five years, and 82 percent fail because of cash flow issues—in essence, an inability to make accurate predictions and informed decisions about their small business finances. What they need is something analogous to a Vehicle Level Reasoning System for their business. Just as an airline can discover that there’s going to be an engine failure 20 – 30 flights from now, these small business people need an AI-powered application to forecast a poor cash flow situation 20 – 30 months from now, or 20 – 30 days from now. They can then use that lead time to tighten their belt, secure additional financing, redouble sales efforts, or otherwise improve their financial footing before it’s too late.

At Intuit, we apply advanced machine learning  techniques to rich data sets to better understand how people are making financial decisions, and to help them make better decisions in the future. With that insight, we can support small business owners who might be considered too risky by a traditional lender. In fact, 60 percent of the QuickBooks Capital customers approved for loans are individuals who have been deemed un-lendable by financial institutions. Beyond the financing itself, we also provide guidance to help people make the best decisions for using the funds. A person who receives a $15,000 loan to make the next payroll immediately sees their total draw-down cost, the total repayment, and also a payment-for-payment plan. Instead of succumbing to a cash-flow crunch or sliding into unmanageable debt, the individual is repositioned for survival and success.

On a more personal level, it’s become something of a hobby of mine to explore the potential of AI to help mitigate the impact of climate change, which is already affecting everyone on the planet. To address this problem, we must first understand exactly what’s happening day-to-day, and where, as weather patterns shift. Data and models are central to this effort, and publicly available NASA data sets allow anyone in the world to apply their own algorithms and analyze the results. This is a fascinating opportunity for anyone with a passion for data science—or climate science—and I’ve taken full advantage of it. 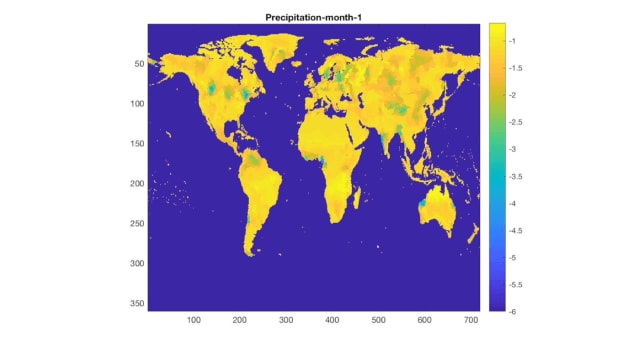 As weather events become more extreme and unpredictable, communities need better ways to predict and prepare for their impact. To this end, I recently built a model of global precipitation patterns showing nonparametric probabilistic distribution capability. The model looks at conditional probabilities of precipitation around the world tomorrow, next month, two months from now, and so on; assesses the likelihood that this precipitation will actually occur; and identifies areas where anomalies from these predictions are most likely—shown above in darkest blue. This type of model can be invaluable in helping communities prepare for weather events that they might not otherwise anticipate, illustrating one of the ways AI can help us adapt to the realities of our changing climate.

As AI continues to evolve and broaden in implementation, we’ll continue to see contributions like these for the common good, from smart city technologies that make streets safer and less congested, to early-warning systems for impending epidemics that help reduce illness and death.

There may well be large-scale societal shifts and adaptations to be made, as in any technological revolution; but just as the industrial revolution greatly increased global prosperity in the 18th and 19th centuries, and the agricultural revolution eased hunger in the 20th century, I’m confident that the positives of the ongoing AI revolution will far outweigh the negatives. I’m excited to be working in the field and eager to see what the future brings for our lives on Earth.

Ashok N. Srivastava, Ph.D., is Senior Vice President and Chief Data Officer at Intuit. He is responsible for setting the vision and direction for large-scale machine learning and artificial intelligence across the enterprise, to help power prosperity across the world.